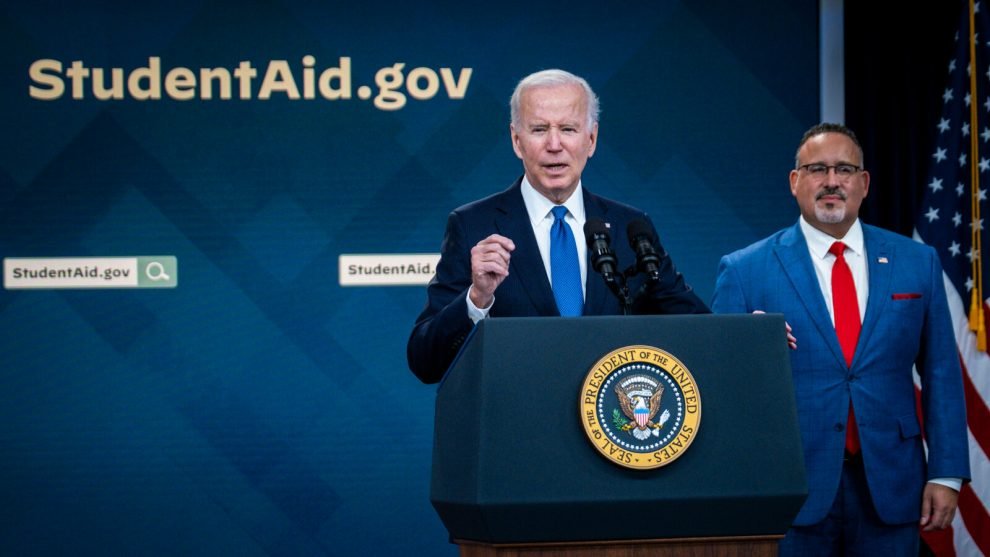 Across the US in recent weeks student loan borrowers hoping to have their debts eased have opened their email inboxes to a message from the US secretary of education, Miguel Cardona.

It read in part: “Lawsuits are preventing the US Department of Education from implementing its one-time student loan debt relief program; we are holding your approved application.”

In August of this year, Joe Biden announced he would cancel up to $20,000 of federal student debt for Pell grant recipients and up to $10,000 for other borrowers. In order to qualify for student debt cancellation, borrowers could not earn more than $125,000 annually, or $250,000 for married couples filing taxes jointly.

But Biden’s high-profile effort to relieve student debt has become mired in a flurry of Republican lawsuits threatening its merit and questioning the president’s reach and – perhaps only temporarily – derailing the hopes of millions of borrowers hoping for a little debt relief.

Even before Biden announced his plans for student debt relief, Republicans like US senator Ted Cruz of Texas and Florida governor Ron DeSantis had questioned the constitutionality of Biden’s use of executive authority to cancel the debt.

Biden invoked the 2003 Heroes Act in order to cancel student loan debt, which gave the secretary of education authority to make changes to any provision of applicable student aid program laws in the aftermath of the September 11 attacks – a claim the Department of Justice backed up in a legal opinion released shortly after Biden’s announcement.

But in September, six Republican-led states – Arkansas, Iowa, Kansas, Missouri, Nebraska and South Carolina – sued Biden, arguing that Congress should have approved any massive student loan debt cancellation and that the Biden administration and the US education department are abusing emergency authority.

While a US district court judge in Missouri dismissed the states’ lawsuit for lacking standing, a federal appellate court temporarily blocked the debt cancellation plan.

More lawsuits include one from Arizona’s attorney general, Mark Brnovich, who called the debt forgiveness program “fundamentally unfair, unconstitutional and unwise”, and another from the Cato Institute, a libertarian thinktank.

Other individual borrowers and taxpayer associations from Indiana and Wisconsin unsuccessfully attempted to sue the Biden administration for student debt cancellation. Supreme court justice Amy Coney Barrett, who is assigned to handle such requests, denied them.

But now the pending litigation puts student loan borrowers in a state of limbo. As a result, the Biden administration extended the pause on student loan payments again, pushing the deadline from December 2022 to June 2023.

The email sent to borrowers went on to say the administration “believe[s] the lawsuits are meritless” and it is working to appeal the decisions.

“The Biden-Harris administration is committed to helping borrowers as they recover from the pandemic. Education is a great equalizer, and we will never stop fighting for you!” it added.