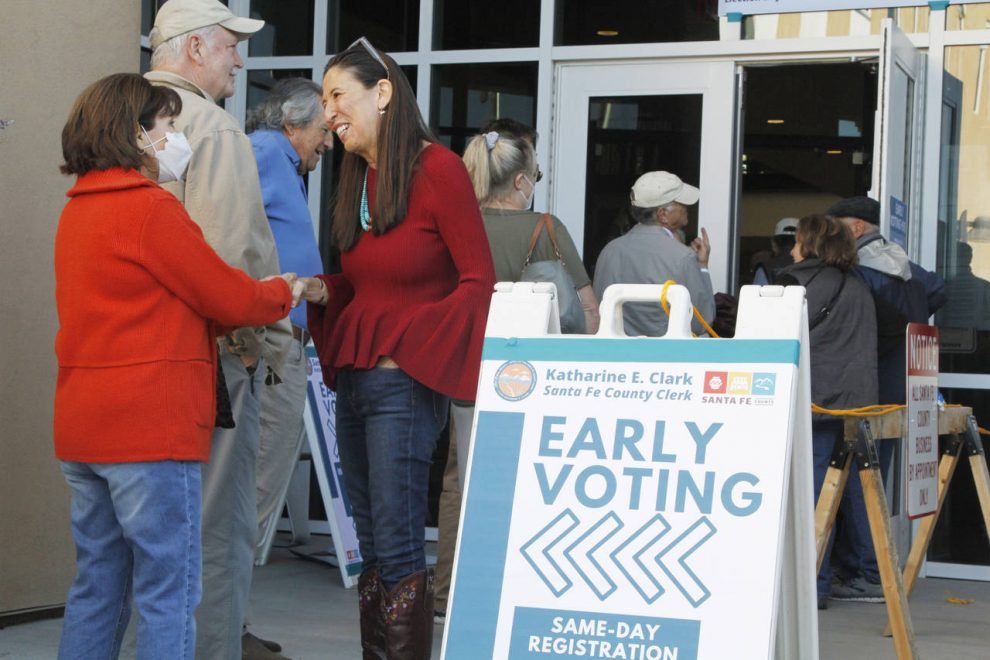 Voting rights advocates in key US states said the first hours of voting in Tuesday’s midterm elections appeared to be going smoothly, with a few isolated problems reported.

“What we are seeing are things that we usually see on Election Day,” said Susannah Goodman, director of election security at Common Cause. “Sometimes voters are going in and one of the voting machines isn’t working, or lines are a little longer.”

One early issue occurred in Maricopa County, Arizona’s most populous, where officials said tabulators were having tech issues in about 20% of its voting locations. Maricopa County chairman Bill Gates and recorder Stephen Richer advised voters experiencing issues to put their ballots inside a secure box attached to the tabulators and assured they would be counted by bipartisan vote counters after polls close.

The tabulator problems were played up in right-wing media, including by Donald Trump Jr., after a post showed an election worker in the Phoenix suburb of Anthem explaining the problem to voters. Gates and Richer said officials were working to resolve the issues and said there would be no impact on voters.

“No one is being disenfranchised. And none of this indicates any fraud or anything of that sort. This is a technical issue,” said Gates.

The tabulator issue is a representative example of the challenges that state and local officials face Tuesday as they brace for potential problems at voting places, contentious legal fights over ballots and disinformation about the vote itself.

More than 45 million pre-election ballots have already been cast in 47 states, and officials are expecting high turnout on Election Day, too, for the congressional, state and gubernatorial contests that will determine control of Congress and state legislative chambers.

The vast majority of the tens of millions who will cast ballots on Tuesday will do so without issue, in an election where early voting has been ahead of 2018 levels. And the vast majority of voting issues will be decidedly minor and small scale, such as long lines, bad weather or tech glitches.

Some check-in machines at voting centers in Bell County, Texas, were not working Tuesday morning due to synchronization issues tied to the switch from Daylight Savings Time over the weekend. There have also been isolated incidents of e-poll books going down in Detroit, though the problems have since been addressed, according to Jake Rollow, a spokesperson for Michigan Department of State.

At the same time, election officials are grappling with newfound pressures from the conspiratorial right. Led by former President Donald Trump, a growing number of Republican politicians have attacked the legitimacy of the vote and repeated false claims that the 2020 election was stolen – and previewed similar attacks for these midterms.

State and local officials and voting rights advocates have raised the alarm that the political attacks, including a marked rise in threats of violence against election workers, have sparked an exodus of local elections officials in charge of the vote.

Cornelius Whiting fills out his ballot at an early voting location in Alexandria, Virginia, on Monday, September 26.Andrew Harnik/AP

Early voting has provided a preview of the potential issues both big and small that could arise on Election Day. In Arizona, armed ballot box watchers were accused of conspiring to intimidate voters, and in Pennsylvania, a legal fight is underway over technical errors invalidating mail-in ballots.

The legal efforts to challenge these issues has also expanded. In all, there have been about 120 legal cases surrounding voting filed as of November 3, compared to 68 before election day in 2020. More than half of the cases have sought to restrict access to the ballot, according to the Democracy Docket, a liberal-leaning voting rights and media platform that tracks election litigation.

In Pennsylvania, some counties are urging voters to correct absentee ballots with missing or improper dates that the state Supreme Court ordered to be set aside, while a federal legal challenge is still looming. In Michigan, meanwhile, a judge rejected a lawsuit Monday from the GOP secretary of state candidate seeking to throw out absentee ballots in Democratic-heavy Detroit.

Georgia’s Cobb County on Monday extended the deadline for roughly 1,000 absentee ballots to be turned in until November 14, after the ballots were not mailed out until just days before Election Day due to procedural errors in the election office.

Beyond the legal fights, elections officials are anticipating possible conflicts with election deniers who have harassed and threatened officials over the 2020 election and prepared for aggressive monitoring of the upcoming midterm contest.

In North Carolina, roughly 15 incidents of alleged intimidation have been reported to the state Board of Elections since the start of early in-person voting.

Incidents included some individuals outside of a county board of elections shooting video of an election worker’s license plate and one situation where an election worker was followed from the voting site to the elections office and then followed to their neighborhood.

In Arizona, the secretary of state’s office has sent 18 referrals to law enforcement related to drop-box intimidation, including a threatening message toward a government worker and several voters reporting being filmed at drop box locations in Maricopa County last week. A federal judge earlier this month imposed new restrictions against a right-wing group in the state following complaints about aggressive patrols of ballot boxes in the state, including blocking the members from openly carrying guns or wearing body armor.

In Beaumont, Texas, a federal judge barred poll workers at an election site from engaging in conduct that Black voters said was intimidating.

US District Judge Michael J. Truncale issued the temporary restraining order Monday in a case brought by Beaumont’s chapter of the NAACP, which alleged that White poll workers spoke aggressively to Black voters, hovered too close behind them while voting and declined to help them cast their ballots.

Federal officials have warned that domestic violent extremists pose a heightened threat to the 2022 midterms.

As the votes come in and begin to be processed and counted on Tuesday, election officials are on guard for conspiracy theories that often spread like wildfire but are flatly untrue.

Because laws in states like Pennsylvania and Michigan prevent the early processing of mail-in ballots, those states could take several days before all the votes are counted. In Pennsylvania, where the Senate race could determine which party controls the chamber, a “red mirage” is expected because Election Day votes, which are expected include more Republicans, are likely to be tabulated before mail-in ballots, which more Democrats are expected to use.

The opposite could be true in Arizona, where mail-in ballots are processed as soon as they are received, meaning those ballots will be the first counted after the polls close.