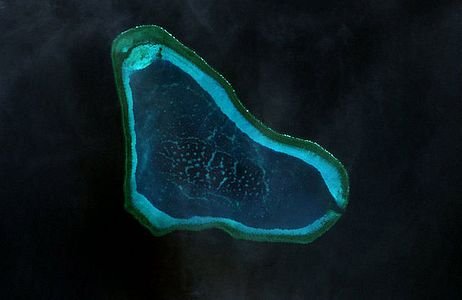 Since Philippine President Ferdinand Marcos Jr. assumed office in June 2022, the Philippines has gradually set about reaffirming its more than 50-year partnership with the United States. His predecessor, former President Rodrigo Duterte, had been outspoken in his disapproval of Washington’s interventionism, while courting Beijing’s good graces in hopes of Chinese investment and concessions in the South China Sea.

So far, China has not reacted strongly to Marcos’ different approach. Beijing acted with unusual restraint in response to U.S. Vice President Kamala Harris’ recent visit to Manila and, more importantly, Palawan last November – a glaring contrast to China’s military maneuvers after U.S. House Speaker Nancy Pelosi’s visit to Taiwan earlier that year. However, the latest developments in the West Philippine Sea show China’s response may not have been as tempered as previously assumed.

Powell claimed that, on the December 8, BRP Andres Bonifacio was en route to Scarborough Shoal when an unknown vessel later identified as CCG-3303 – the same vessel encountered by the Indonesian Navy in the North Natuna Sea two years prior – moved in from the northeast and positioned itself between the Bonifacio and Scarborough Shoal. The two ships converged to about 800 meters, mirroring each other’s movements, until the Bonifacio peeled off and returned to the Philippines’ territorial waters.

Scarborough Shoal was the site of a China-Philippines standoff in the spring of 2012, when Chinese Marine Surveillance vessels blocked a Philippine Navy ship from attempting to arrest Chinese fishing boats within the shoal. China has occupied the shoal near continuously since then, often chasing Filipino fishing vessels away from the area. A 2016 ruling by the Permanent Court of Arbitration had dismissed China’s sweeping claims over most of the South China Sea, including the Scarborough Shoal.

While the Armed Forces of the Philippines (AFP) has yet to identify the veracity of Gordian Knot Center’s reports, the evidence gathered from open source data, allowing tracking of the Chinese and Philippine vessels, speaks for itself. Beijing continues to disregard the Philippines’ national sovereignty and territorial integrity in pursuit of its “core interests.”

Meeting with Chinese President Xi Jinping in Beijing at the start of the new year, Marcos had attempted to set aside his country’s territorial disputes in order to exploit the vast oil and gas resources in the West Philippine Sea under a joint exploration agreement with China. Former President Duterte had attempted a similar agreement with Xi in 2020, but had to terminate negotiations just before the end of his term in 2022 after failing to reach an adequate compromise.

The government’s plans experienced a major setback when, in a 12-2-1 vote, the Supreme Court of the Philippines declared the 2005 Tripartite Agreement for Joint Marine Seismic Undertaking (JMSU) “unconstitutional and void” pursuant to Section 2, Article XII of the 1987 Constitution, which mandates the exploration, development, and utilization (EDU) of natural resources be under the full control and supervision of the state.ADVERTISEMENT

Signed under then-President Gloria Macapagal-Arroyo, the JMSU provided for the large-scale exploration of petroleum resources in the South China Sea between China, the Philippines, and Vietnam until its expiration in 2008. This was despite the fact that nearly 80 percent of the 142,886-square kilometer area stipulated fell well within the Philippines’ exclusive economic zone (EEZ).The agreement was controversial even at the time. Policymakers and practitioners alike denounced the JMSU as a Trojan horse that opened the gate to Chinese incursions, vindicated only by the harmless veneer of “exploration.”

With the lifting of the late President Benigno Aquino III’s moratorium on oil and gas exploration by Duterte in 2020, the JSMU had served as the legal blueprint for joint development of the disputed territories. The Supreme Court ruling against the JSMU 14 years after party-list Bayan Muna filed its protest in 2008 puts into question the future of further joint activities in the area, casting an even greater shadow of skepticism around Manila’s efforts to accommodate Chinese interests.

It is no coincidence that, around the same time Marcos was considering a joint exploration agreement with China, CCG-5205 – one of a number of China Coast Guard vessels operating in and out of the disputed South China Sea territories since 2020 – was spotted precisely where such a project would take place. Images shared by Powell showed CCG-5205 moving northeast toward Reed Bank on the morning of January 9 – just a day prior to the Supreme Court’s decision – where it stayed for 13 hours before continuing on its course. It was spotted again the following morning, cruising 70 nautical miles west off the coast of Palawan before returning to Mischief Reef.

Major actors in the Indo-Pacific have already enacted a fundamental shift in their dealings with China. While Beijing has capitalized on the new government in Canberra to thaw relations with Australia, the United States and Japan have taken increasingly hardline measures to counter Chinese expansionism in the South China Sea. Indeed, the question on Washington and Tokyo’s minds is no longer if but when a conflict with China is likely to occur. Russia’s actions in Europe have proven that interstate conflict remains a distinct possibility even in the supposed liberal order of the 21st century.

Caught in the crossfire of great power competition with neither the military nor economic ability to survive on its own, the Philippines must maintain a delicate balancing act between assertion and appeasement, lest it devolve into Asia’s own Ukraine.