Home » No Escape for Putin from His Lonely and Tight Corner 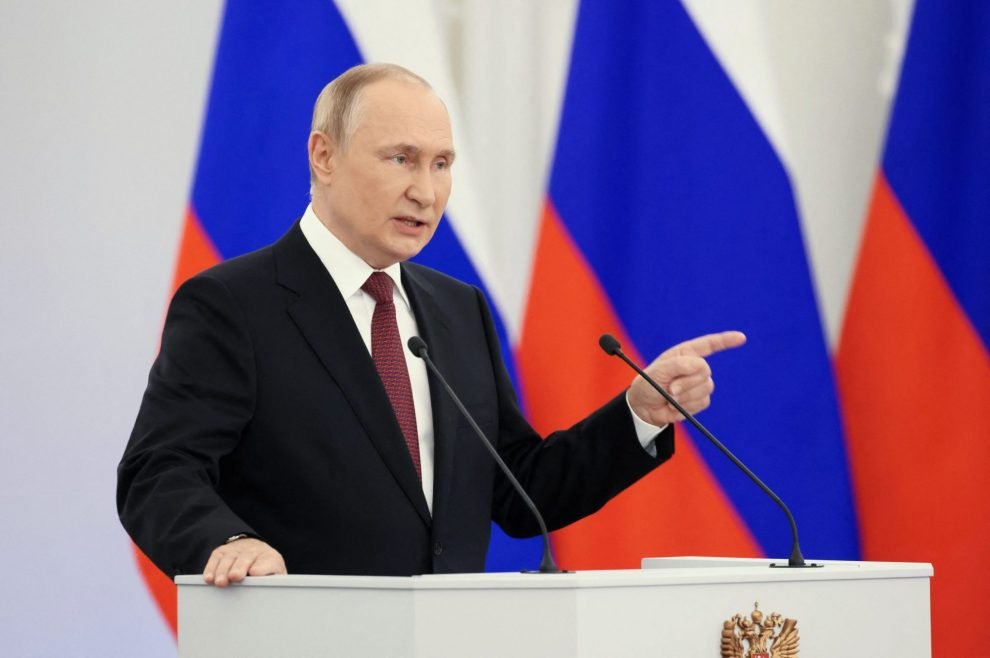 On October 7, celebrations in Russia for President Vladimir Putin’s 70th birthday were rather muted and distinctly half-hearted.

For the big day, Putin opted to stage an informal gathering of six leaders from post-Soviet states — Armenia, Azerbaijan, Belarus, Kazakhstan, Tajikistan and Turkmenistan — in St. Petersburg. The formal meeting of the barely functional Commonwealth of Independent States (CIS) is scheduled next week in the Kazakhstani capital of Astana (recently renamed back from Nur-Sultan).

The Russian president described the content-free gathering as a “good tradition,” perhaps reflecting on his 50th birthday at the CIS summit in Chisinau, Moldova, when, at the time, his reform agenda inspired hope for meaningful cooperation (Interfax, October 7).

Presently, Putin’s wishes are mostly for charting backroads to circumvent Western sanctions, and he has tried his best to eliminate tensions with reform-minded Kazakhstani President Kassym-Jomart Tokayev, who has preferred to comply with the West’s sanctions regime (Kommersant, October 6).

A call from Erdogan

Among the few congratulatory telephone calls, one that went beyond mere polite overtures, was from Turkish President Recep Tayyip Erdogan, who fancies himself as a key interlocutor between Russia and Ukraine (Izvestiya, October 7). Neither side presently shows any interest in talks, as the Russian maximalist position is becoming increasingly detached from the reality on the ground. Even routine deals on prisoner exchanges have stalled (Kavkaz-uzel.eu, October 8).

Exploring other options, Erdogan seeks to manage the settlement of the Armenian-Azerbaijani conflict, and Nikol Pashinyan, Armenia’s embattled president, has not been able to garner sufficient support from Putin to counter this pressure (Nezavisimaya gazeta, October 6). Syria also remains one of Erdogan’s key targets, and Putin is trying to postpone the long-promised Turkish offensive yet further (Russiancouncil.ru, October 3).

No call from Xi

Putin waited in vain to answer a call from Chinese President Xi Jinping, who is apparently too busy with the final preparations for the 20th National Congress of the Chinese Communist Party (Kommersant, September 25).

At their latest face-to-face meeting, during the Samarkand summit of the Shanghai Cooperation Organization in mid-September 2022, Xi expressed to his “dear friend” his wish for bringing the war in Ukraine to an end as soon as possible (Rosbalt, September 20). Putin responded with the double order on annexing four Ukrainian regions and launching a partial mobilization in Russia, but this attempt to break the pattern of slow retreat has backfired and instead accelerated the dynamics of defeat (The Insider, October 4). The explosion that heavily damaged the Kerch Bridge to Crimea the day after Putin’s birthday illuminated the unfolding disaster of disorganized retreats (Meduza, October 8).

In hindsight, a limited mobilization in midsummer, when the Russian army was still on the offensive but a shortage of manpower was becoming apparent, would have produced a lukewarm social response. But presently, Russian society has suffered an unmitigated shock (Re-russia.net, October 3).

The official target figure for mobilization is 300,000 men, but perhaps three times as many have hit the roads in every possible direction seeking to escape the press gangs (Novaya gazeta, October 5). This mass anxiety is aggravated by the instant deluge of reports on chaos in the mobilization centers, where neither food nor uniforms are being provided for the draftees, who are often transported to the war zone without even elementary training (Svoboda, October 5).

The full economic costs of this disruption of the labor market and destruction of small businesses are beyond estimate, but the yawning deficit of the state budget, as well as regional budgets — for which neither the expenses of mobilization nor the sharp decline of income from taxation were calculated — is already clear (The Insider, October 3).

Putin has tried to reassure the amplified worries by ordering corrections to the “excesses” in conducting the mobilization and issuing decrees on financial support for the draftees and their families (RBC, October 7).

Public opinion remains anxious, and the elites are growing increasingly uneasy, which is visible even on the faces of courtiers, who are duty bound to listen to the Russian president’s far from coherent discourse (Svoboda, October 5). Few of them share, or pretend to share, the angst of jingoist bloggers and saber-rattling “war-correspondents,” who were seen by the Kremlin as useful amplifiers of official propaganda when Russian forces in Donbas were still pushing forward; yet, given recent developments, these voices have become a major irritant in the past few weeks (Nezavisimaya gazeta, October 6). The blame game increasingly focuses on Russian Defense Minister Sergei Shoigu, but Putin has long been suspicious of ambitious generals, and therefore, he would ensure no potential replacement would unite the top brass and encourage the officer corps (Meduza, October 7).

Putin tolerates the noises emitted by the “patriotic” war-makers, but his confidence in the effective suppression of the anti-war movement was shaken, when, on October 7, the Nobel Peace Prize was awarded to the renowned organization Memorial, together with the Ukrainian Center for Civil Liberties and Ales Bialiatski, a veteran Belarusian human rights activist (Forbes.ru, October 8).

All Memorial branches and activities have been banned by the Kremlin since December 2021 for violations of the notorious legislation on “foreign agents,” but the news about the well-deserved prize has reunited and re-energized thousands of defenders of democracy in Russia (Novaya gazeta, October 8).

The leaders of this movement, including Vladimir Kara-Murza, are now being prosecuted for high treason, but the deepening public discontent with the war against Ukraine cannot be dispelled by such repressions (Kommersant, October 6). The power-holders are aware that the patience of a usually passive and superficially loyal populace has limits, but they have no way of knowing which spike in economic hardships will suddenly trigger a breach (The Bell, October 7).

For Russian elites, the fear of a spontaneous explosion of public anger is counterbalancing against the habitual fear of Putin’s wrath. The lonely leader can hardly avoid reflections on the lavish celebration of Nikita Khrushchev’s 70th birthday, followed in the matter of a few months by a palace coup that left the Soviet leader imprisoned in a modest dacha. In the situation of an unfolding military disaster, Putin cannot hope for a similar “friendly” deposing.

Escalating the stakes, the Russian president has made himself into the core of the war problem (ironically similar to Xi Jinping’s making himself the “core” of the Chinese Communist Party), and there is no off-ramp in sight from his presiding over Russia’s looming defeat. When every sanctioned oligarch and corrupt henchman knows that the only way out is by throwing the boss under the bus, such an accident can happen as suddenly as the explosion on the Crimea bridge. G20 in Bali to collaborate to respond to global threats
Population in the US: as small towns shrink, is immigration the answer?