In a little publicized initiative, the Biden administration is seeking to tackle the ‘junk fees’ hitting Americans when they can’t afford it

They are one of the banes of modern life: “junk fees”. And they are paid for a vast list of things from terminating cellphone contracts early, to checking baggage on an airplane and getting an overdraft on a bank account. What’s worse, is many of these fees are hard to find, or hidden until it’s time to pay, and they impact poor people the most.

But Joe Biden – in a little publicized initiative – is seeking to tackle these hidden costs and has made eliminating, or at least drastically reducing them, one of the key planks of his economic plans.

At a recent meeting of the White House competition council meeting, the third of its kind since its creation in 2021, these added fees across all industries were top of the agenda.

Present at the meeting was Rohit Chopra, the director of the Consumer Finance Protection Bureau (CFPB), a US government agency responsible for consumer protection in the financial sector.

In an interview with the Guardian, the Biden appointee said his organization had already taken steps to eliminate these so-called “junk fees”.

“Junk fees are creeping across the entire economy. And one major place that Americans experience it is in their financial life when dealing with their bank accounts and other loans. We’ve all already started to hear from the public on all the types of financial fees that they’ve been hit with – and many people don’t even know if they’re getting any service at all. They don’t have any understanding on how the price was set. And in many cases, they don’t even want the so-called service that’s being provided,” he said.

While the Biden administration doesn’t have the broad sweeping authority to force a cellphone company to cut contract termination fees or prevent a Harry Styles fan from being charged a “convenience fee” by a concert ticket vendor, it can direct federal departments and agencies to concentrate efforts in the specific sectors they operate.

Agencies like the CFPB have authority over banks, credit unions, loan servicers and debt collection agencies, where junk fees also predominate. Another federal entity, the Department of Transportation, headed by Pete Buttigieg, is also cracking down on airline fees associated with seat selection, baggage and rebooking.

“We’ve already issued some policies on a host of them. One is pay-to-pay fees, where debt collectors charge you a fee for paying them. Then there’s other ones that we’ve identified, [like] overdraft, but another fee is a so-called ‘NSF fee’, or non-sufficient funds fee, and that’s where you get charged when you supposedly don’t have enough money in your bank account,” he said.

A report published by the CFPB estimates that $12bn in credit card late fees are being charged. Chopra said the goal here is transparency in pricing and healthy competition in the sector.

“What I want to see in the market is competitively priced services. We want to make sure that people are competing up front, rather than imposing gotcha fees on the back end. That creates a marketplace where people can choose more wisely. And too often across the economy, we see products and services advertised as ‘free’, but there are really costs baked in the back end of it.”

Top of many Americans minds right now is high inflation, and the inability to keep up with the cost of regularly occurring monthly payments such as utility bills and mortgages when the costs of things like food or running a car are rising. The Biden administration and Chopra believe eliminating many of these fees will mitigate some of the problems caused by inflation, especially as the country braces for key midterm elections in November.

“I will also say that this is really particularly important, as people are facing increased costs. Across the board, people are paying more of their income for housing. The cost of cars has gone up because of the global chip shortage. And, of course, we’re dealing with inflation. But these are longstanding problems that [make] many people feel sick and tired.”

This year, some banks took initiative to do away with NSF and overdraft fees on their own after the CFPB published a report on banks’ dependence on these fees which predominantly hurt customers from a lower socioeconomic background. Shortly after, Capital One, Citibank, and others eliminated these fees. Capital One lost an estimated $150m in annual revenue as a result of this measure. Wells Fargo and Bank of America eliminated NSF fees, but maintain an overdraft fee.

According to the CFPB, Wells Fargo earned $1bn while Bank of America raked in over $800m in overdraft and NSF revenue from January through September 2021. The CFPB is also ordering Regions Bank to pay $191m for “illegal surprise overdraft fees”.

“I’m really encouraged that banks are starting to compete, and not just looking to all charge the same high fee. And in many cases, more people are asking the question, I thought, but all of this new technology was supposed to make costs lower. And why is that not being reflected in these fields?”

But it is not easy.

“The devil really is in the details. It’s not just how big the fee is. It’s also behind-the-scenes systems that are triggered, bring them for people. I still think there’s more we need to look at, but I am encouraged that the direction the industry is moving,” Chopra said.

But if companies catch wind of a government crackdown on these hidden fees, won’t they just raise the price of goods and services on the whole?

Rafi Mohammed is an economist and pricing strategy consultant. He said if forced to disclose prices upfront instead of offering goods and services a la carte, like in the case of airlines selling airplane seats or baggage as a separate cost, Biden’s policy could lead to companies raising prices on the whole.

Mohammed advocates for getting rid of unavoidable hidden “gotcha” fees (convenience fees, for example) tacked on at the end of a sale, but argued those should be considered distinct from separate prices for different products. Not everyone carries luggage while traveling, so why should they pay for those who do, he argues.

“Eliminating the so-called ‘junk’ fees that President Biden has mentioned will lead to higher overall prices. Consumers will end up paying for additional features that they do not want as well as absorbing costs that they are not responsible for.”

Chopra said that’s not the case.

“We’re not seeing that. What we’re seeing is the results of more competition. We’re seeing that people are competing down these fees and being more clear about the total cost. And a competitive market often leads to more benefits for consumers. That’s what we’re hoping to see.

“If the question is will companies pack on new junk fees? Sure, some will. But that doesn’t mean that we should not really go after illegal practices and not want to look for ways that the market can be more competitive.” 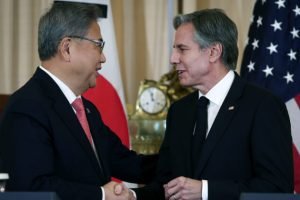