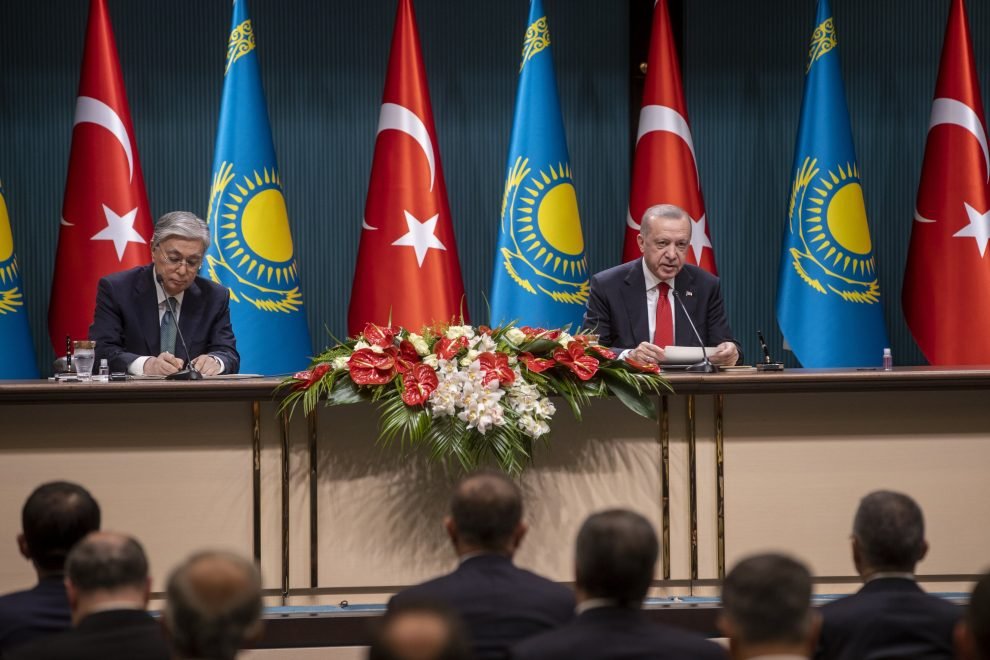 The two presidents agreed to boost a transport corridor that bypasses Russia.

Ukraine was on the agenda, along with trade and transportation routes, as President Kassym-Jomart Tokayev paid his first state visit to Turkey this week since coming to power in 2019.

However, anyone looking at reports from Tokayev’s office on his May 10 talks with his Turkish counterpart Recep Tayyip Erdogan had to read between the lines to surmise that they discussed Ukraine at all, since it did not mention the country by name.

Instead, Akorda, the presidential palace, talked euphemistically of the “deterioration in the geopolitical situation.” That is a measure of the diplomatic tightrope Kazakhstan is walking over the war launched on Ukraine by Nur-Sultan’s neighbor and ally Russia.

The diplomatic speak from the office of Erdogan, host of peace talks between Russia and Ukraine, was a little more direct.

The two “discussed the regional and global effects of the situation in Ukraine,” it reported.

“We have particularly observed that our views, that the crisis should be resolved by peaceful means on the basis of Ukraine’s sovereignty and territorial integrity, overlap.”

Kazakhstan has declined to side with Russia over the war, while also refraining from outright criticism of its ally.

It has become the target of rabid attacks from Russian commentators, who perceive disloyalty in its attempt to strike a neutral stance.

All this makes Nur-Sultan’s relationship with Ankara, already close, an attractive one to bolster as a counterweight to Russia.

Erdogan is also eager to foster closer partnerships within the Turkic world, with himself as leader.

The war in Ukraine “has once again showed the importance of the solidarity and cooperation among the Turkic states both at the bilateral level and within the Organization of Turkic States,” he said. He was referring to the regional grouping that also includes Azerbaijan, Kyrgyzstan and Uzbekistan.

Erdogan also accepted an invitation for a bilateral visit that month.

The two presidents concurred on the need to boost an existing transport corridor linking China with Turkey that bypasses Russia. The route has assumed fresh importance in the light of sanctions against Russia.

Maximizing the potential of the Trans-Caspian International Transport Route, also known as the Middle Corridor, was “particularly important,” Tokayev stressed.

The route now looks crucial to Kazakhstan keeping on track its bid to become a trade and logistics hub between China and Europe, which the war in Ukraine threatens to derail.

Nicknamed the Iron Silk Road, the trans-Caspian route links the Chinese city of Xi’an with Istanbul via a railroad through Kazakhstan, a maritime link to Azerbaijan across the Caspian Sea, and onwards by rail through Georgia to Turkey.

That cuts shipping time to as little as 12 days compared to around a month for maritime freight between China and Turkey, which touts this as key to transforming itself into a “logistics superpower.”

Cargo trade is forecast to increase by six times this year compared to last, to 3.1 million tons, a meeting in Ankara of transport and logistics operators working on the trans-Caspian route heard on May 11.

With all that in mind, Turkish and Kazakh officials signed agreements on simplified customs control and intermodal freight transport.

That will boost their goal of increasing trade to $10 billion in the coming years.

Tokayev met some giants of Turkish industry on May 11 to promote Kazakhstan as an attractive investment destination, stressing his goal of “de-monopolization of the economy” through reforms to create “honest competition.”

The pitch seems to have paid off: 30 commercial deals potentially worth $1 billion were signed during the visit.