“The Big Apple”, “The Capital of the World”, and “The City That Never Sleeps”; New York is known by so many names it’s hard to keep track. But one stuck with most of us: “The City of Dreams”. And being the city that makes dreams come true also comes with a side of advantages. Along with its exquisite art and business opportunities, New York is known for its Christmas opportunities.

From Rockefeller Center’s iconic Christmas tree to the New Year’s Eve ball drop in Times Square, New York is magical during the holidays, and clever producers have capitalized on the opportunity, shooting films in New York that make people hopeful. So whether you need a little cheer this Christmas or are jotting down New York’s finest to celebrate in the city, these movies should be on your radar.

It’s Christmas Eve, and Bill Murray is all set for his live Christmas special. But when a snowstorm hits the city and most of his guests cancel, Bill is disheartened. His producers convince him to follow through anyway because he stands to lose money if he doesn’t perform. Even as Bill decides to go through with it, it’s not the same because what’s Christmas when not celebrated with friends and family?

Set in The Carlyle, a hotel under the Roosevelt Group in New York, A Very Murray Christmas sneaks up on you with memories of Christmases from the past. While not excessively hilarious, the Christmas special is just enough to make the time spent watching worth it.

Jack Campbell (Nicolas Cage) is a Wall Street executive in New York City. Fresh out of college, he had promised his girlfriend, Kate (Téa Leoni), that they would survive the tests of time, but 13 years later, he has forgotten all about her. Until on Christmas Day, he wakes up next to her and two children in a New Jersey apartment. His sports car being replaced by a minivan, and his girlfriend now his wife, Jack is about to find out how the other side lives.

While some part of the film is shot in New Jersey, a significant portion of the screen time is dedicated to the Manhattan area, including Jack’s penthouse and his office.

IBC Television president Frank Cross (Bill Murray) is a surly man making his entire company work through Christmas. Everyone influential on his list receives an expensive four-head hi-fi stereo VCR as a Christmas present, while everyone else receives cheap company towels. What Frank needs is Christmas cheer and, agreeably, compassion, and that’s precisely what happens when three spirits visit him throughout the play he’s planning to broadcast, each bearing a lesson about the Christmas spirit.

In one of the most New York takes ever, one of the ghosts in Scrooged appears as a taxi driver, and the rest of his redemption arc is spread all over the city, hopping from issue to issue that makes him Scrooge-like.

In what can only be called a Love, Actually successor, New Year’s Eve follows an all-star cast and intertwines several storylines in the run-up to the New Year. While some of these stories are stronger than others – the unlikely bond between Paul and underappreciated secretary Ingrid, for example – the film is a heartwarming and lighthearted watch.

Featuring a wide variety of friendships and relationships among Halle Berry, Jessica Biel, Jon Bon Jovi, Katherine Heigl, Zac Efron, Sarah Jessica Parker, and others, New Year’s Eve gets the characters ready for the ball to drop and ring in New York City.

Set in a stoner comedy way as one has come to expect from stars like Seth Rogan, The Night Before follows three friends, Isaac (Seth Rogan), Ethan (Joseph Gordon-Lewitt and Chris (Anthony Mackie), as they traverse their last Christmas together, trying to find the mystical Nutcracker Ball. While most stoner comedies shy away from emotion, this film makes an exception with the opening scene featuring the death of Ethan’s parents in December 2001 and fast forwards to 2015 when his friends have spent every Christmas since trying to make him feel the cheer.

As the three go party-hopping, we see some of New York’s major attractions, including The New Yorker and the Rink at Rockefeller Center.

A Christmas classic through and through, Miracle On 34th Street follows an old man going by the name of Kris Kringle (Edmund Gwenn), who works as a department-store Santa Claus. It’s all ho-ho-ho until he claims to be the real Santa Claus, which leads to a lawsuit questioning his sanity. The film is a good-natured comedy, and while its sequel is more popular, the original is underappreciated and worth watching.

True to the title, the movie was shot in New York and featured many New York City sites and institutions, including the New York Supreme Court, Macy’s Herald Square department store, Central Park, and the Thanksgiving parade.

In the sequel to 1990’s Home Alone, Kevin (Macaulay Culkin) again finds himself … alone at Christmas. But, this time, a mixup at the airport lands him straight in New York. Like the enchanted kid he is, Kevin uses his father’s credit card to check himself into the Plaza Hotel and overloads on room service, with the exception of battling burglars once in a while.

Kevin lives everyone’s dream in this equivalent of a New York Christmastime tour, featuring some of the most iconic locations in the city, covering Central Park, Rockefeller Center, Radio City Music Hall, and Battery Park.

When Jonathan (John Cusack) and Sara (Kate Beckinsale) find instant mutual attraction while attempting to buy the same black cashmere gloves at Bloomingdale’s, Sara is almost sure they’re soulmates. She believes in fate, but this only works out if he does too. While they’re in relationships when they meet, these kindred spirits find each other again years later, making the movie live up to the title.

Throughout the movie’s serendipitous encounters, the backgrounds adorned include locations such as the ice skating rink in Central Park, the Waldorf Astoria hotel, and Bloomingdale’s in Manhattan.

The last time Harry (Billy Crystal) and Sally (Meg Ryan) met, she gave him a ride from Chicago to NYC right after graduating from college. They left things on a sour note and have been that way since. But when a chance encounter brings them back together on Christmas, these best friends might find their way back into each other’s lives and hearts.

While When Harry Met Sally isn’t a staple Christmas movie, it features every stop in New York Christmas warrants. From dragging Christmas trees to their apartment to ice skating at the Rink, Harry and Sally give us a run of the best things to do – in addition to finding love – this Christmas.

Considered one of the best New York Christmas movies of the 21st century, Elf follows Buddy (Will Ferrell), a human raised as an elf at the North Pole. Upon discovering his true species, Buddy travels to New York City in search of his biological father, Walter (James Caan). The only problem: where Buddy is optimistic, innocent, and ever excited, Walter is anything but.

As Buddy travels through New York City, he perceives it as some magical land. Even when he’s hit – quite literally – by the reality of the world he’s arrived in, he’s infatuated and appreciates everything around him. Elf also features Buddy traveling to the Empire State Building and Central Park. 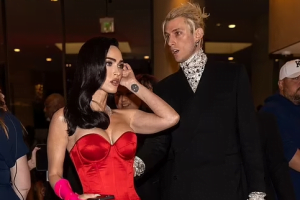