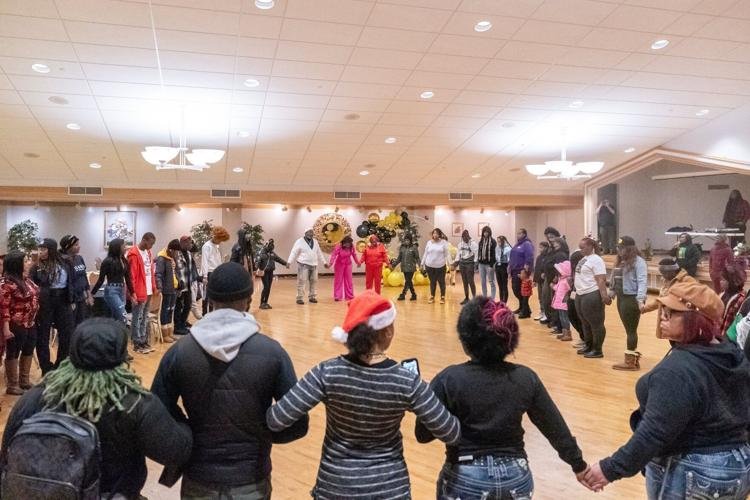 The 15-year-old high school sophomore loved to dance, and never met a spread of food or a Christmas party she didn’t like, said her mother, Keisha Acres.

So when Acres was faced this year with the thought of Christmas without her daughter, she didn’t want to be alone. Alexzandria was the only student killed Oct. 24 in a school shooting by a former student at Central Visual and Performing Arts High School.

On Friday, about two months after the teen’s death, Acres gathered those bound by the tragedy just before Christmas for the kind of large dinner her daughter had loved.

Several dozen of Alexzandria’s former classmates at CVPA along with community members, family and friends gathered for the event Friday evening at the Polish Heritage Center northwest of downtown St. Louis. The center donated its space, and volunteers provided catering for the event.

Jean Kuczka, a 61-year-old health and physical education teacher at CVPA, was also killed when she stood between the gunman and her students. Seven others — all 15- and 16-year-olds — were wounded.

Acres said the event was an effort to cope with the overwhelming loss of a child.

“I read the best way to handle grief is to do things you’d normally do,” she said. “Well, I would normally make a bunch of food and see a lot of people. I didn’t want that to change this year.”

The dinner is also an acknowledgment that her grief is shared, Acres said.

“I’m dealing with this, but I know everyone else is dealing with it too. I want to be around the people that knew and loved her,” she said. “I want them to know you don’t have to shut yourself off. You can stay engaged.”

CVPA seniors Marius McFadden and Arianna Roberts said they attended the dinner Friday to support the family and be with classmates around the holidays.

“It’s nice to get out of the house and support them,” said McFadden, who knew Alexzandria because they were both involved with dance at CVPA. “She always seemed just sweet and happy.”

The event featured a DJ, large chicken dinner, balloons in the CVPA colors, and dancing.

Chrysta Conway-Sims, a maternal aunt of Alexzandria, said her sister has always been involved in the community and uses that as a way to heal.

“Since her baby is gone, this is her way to keep her name alive, to heal,” she said. “And she wants to do what she can for the kids who were there too.”

Conway-Sims said she always remembers that at Christmas Alexzandria would be thrilled no matter the size of her gift.

“It was like Christmas all the time for her. She was just a joyful kid,” Conway-Sims said. “I remember she got a small little plushie animal one year, and she acted like it was a million dollars.”

On Christmas Day, Acres, plans to have a quieter day.

She will visit Friedens Cemetery to be at the grave of the 15-year-old girl she lost.